RSS
← To Judge or Not to Judge
Digging Deeper →

The Kingdom of God is NOT a Reality Show

As I have stated in past blog posts, Christianity in this country has fallen into the grip and influence of Hollywood. We live in an age of celebrity preachers and very large churches that look and operate more like corporations than the temples where people are taught the unadulterated Word of God. The church at large no longer seems to be a place where people are delivered and set free from strongholds and bondages. It has become more like a place where people can come and be entertained with great music and charismatic sermons that are not designed to convict people of their sin. Not to mention, the word REPENT no longer appears to be a part of the church vernacular. People flock to churches because of the status of a preacher, especially if he is on TV or hobnobs with celebrities and professional athletes. And don’t let him be handsome or have an excessive amount of charisma.

So now it’s almost like the church has become no different from an exclusive social club where people are clamoring for attention and status. Yes, the church as I knew growing up no longer exists. Most of the churches that exist in this country are not changing the communities around them. Actually, it appears to be vice versa. For example, I get angry when I think about how most churches (especially black churches) lack ministries that cater to sexual abuse and brokenness. It makes me mad that I live in the metropolitan city that has the highest occurrence of sex trafficking, yet there are hundreds, even thousands of churches all over the place! What exactly are they doing?! It also pains me to see so few churches who are actively involved in rectifying this issue, as well as many others. Granted, I know that I might sound presumptuous, but I believe the fruit speaks for itself. I believe the community and surrounding areas would be a very different if the church was truly operating the way God intended. Now I do want to emphasize that I am talking about the American church collectively because I know that there are still true places of worship that are led by leaders who sincerely shepherd the flock that has been entrusted to them.

So why am I mentioning this? Well, after watching the first episode of “Preachers of L.A.,” I can fully understand why the American church has become an entity to be mocked and even hated. This new reality show profiles pastors who oversee fairly large congregations and who live lives full of luxury. Don’t get me wrong, I’m not suggesting that a church leader shouldn’t be financially prosperous, but why do their riches have to be paraded before the entire world? Shouldn’t there be some modesty and humility on their part, considering that they are the ones who are setting the example? I’m sure that just about all of us have the heard the scripture that says we can’t serve God and mammon, but these pastors are trying to and it surely is not working. Aren’t these leaders supposedly trying to model their character after the One who never owned a mansion or had money? As a matter of fact, the Word explicitly states that church leaders cannot be greedy for money. (See Titus 1:7, I Timonthy 3:3 and 3:8) I can only wonder what people across the nation were thinking when they saw the mansions, luxury cars, expensive suits and Rolex watches that these “men of God” sported. I wonder how many people in their congregations are struggling to keep a roof over their head and food on the table, and the number of the families in their churches that are headed by single mothers wouldn’t surprise me either. From what I can see, this show only gave unbelievers more ammunition to justify the reasons why they don’t believe in God or attend church. I bet you that the salaries these preachers are being paid from the show blinded them to the fact that “reality television” is always edited for the purpose of obtaining higher ratings. Did they not consider that their arguments and disagreements would always be highlighted because of people’s addiction to drama? The exchange between some of them towards the end of the episode was no different than what one would see on “Real Housewives of Atlanta” and all the other ridiculous reality shows that pollute the channels on television. Oh and did I tell you that five out of the six preachers are Black American? Yeah, you already know the deal… Stereotypes, stereotypes and more stereotypes… Did they not consider that their homes and luxuries would be on display just like on that show “MTV Cribs” or any other shows that feature lifestyles of the rich and famous? Seeing Bishop Clarence McClendon’s mansion was the perfect proof that this show is exalting these pastors; not the Heavenly Father. Did it ever cross their minds that people would get the wrong idea about Christianity and the church? The last time I checked, Jesus Christ did not die so that we could become celebrities or be rich. He died so that we may have the chance to be in eternity with Him. 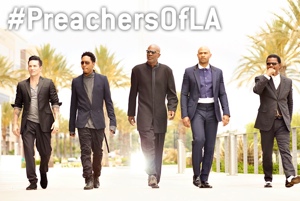 Now I do want to point out that I could respect the fact that one of the preachers goes back to his old neighborhood to win souls into the Kingdom. I respect the fact that he puts himself in harm’s way to minister to gang bangers. However, when he was able to get them to a gospel concert, something really disappointing and telling happened. This preacher summoned the men who were in gangs up to the stage during the altar call in order to lead them in a prayer for their salvation. Meanwhile, Deitrick Haddon (Award winning Gospel singer and one of the preachers) tapped him on the shoulder and told him he only had five minutes for the altar call. So in other words, his concert was more important than the eternal fate of these men’s souls. He needed to be on stage and the fact that these men were confessing Jesus Christ as their lord and savior was an inconvenience to him. But hey, this is what the church at large has been reduced to… People aren’t rejoicing and shouting over souls being saved. They’re getting hyped over the belief that their present sinful conditions are covered by grace and that they don’t have to change. They’re shouting over the fantasy that some extravagant, grandeur blessing is going to fall out of the sky because of the fact that they are manipulated into giving all their money to the church.

So for those who are defending this show, I challenge you to really do some soul searching and ask God if this show is truly honoring Him. If you believe so, then why is all the attention on the preachers and their personal lives? Why is the focus on their drama, their issues, their arguments, their families, etc..? Where is the focus on ministry??? Why is so much attention paid to their material possessions? Come on folks, it is time to put away the foolishness and get real! It is time for the REMNANT to rise up and spark a revival in this nation! It is time to distinguish the wheat from the tare. It is time to expose the spirit of Hollywood that has infiltrated the church. It is time to pray! Oh and no, I will not be patronizing this show, flooding my eye gates and ear gates with only a form of godliness. I need the real deal. The times are to crucial for me to risk being DECEIVED.

Posted by SpiritualHardCandy on October 16, 2013 in Spirituality

← To Judge or Not to Judge
Digging Deeper →