Over the years I have rolled my eyes time and time again at Christian cinema. I paid attention to the obvious budget constraints that tainted the overall quality of the final product and made my critiques, taking in the popular belief that Christian movies are LAME. They are usually characterized as “B” movies and are characterized as having lame story lines, bad acting and lacking overall in the other qualities that mainstream movies possess. They became and still are somewhat of a laughing stock amongst pop culture, and myself and many other believers have mocked and scoffed at these movies. Hardly any of them made it to the big screen and usually you would see them at your local Blockbuster for rent; at that time.

Since then, more Christian movies began to make it to the big screen and this select few had more money to back them. Obviously, “The Passion of the Christ” is the biggest Christian movie of all time in terms of the money it made and the media attention it received around the world. A few other notable movies have also hit the big screen since then and some even managed to grab one of the top spots during their first weeks of release.  Unfortunately, these movies have been few and far between. You can count of the number of them on one hand. However, Christian movies as a whole still don’t do well in the box office and typically go straight to DVD. They are usually found in Christian bookstores and make little profit, if any.

So what is the issue? Well, a friend and co-host of mine for an Internet radio show we do had an experience that answers this question no holds barred. He is the youth and young adult pastor at his church, and not too long ago, he tried to take his group to see the movie “Grace Unplugged.” The movie had been released just a week prior but when they got to the theatre, they were shocked to see that the movie had already been pulled due to lack of sales. Obviously for them to pull a movie after one week means that it did HORRENDOUSLY. He spoke with the manager of the theatre and the man told him the ugly, unadulterated truth: Christians don’t support Christian movies. From what my friend said, he wasn’t even sure if this man was a believer in Jesus Christ. So for this statement to possibly come from the outside is really, really sad… My co-host told this story during one of our radio broadcasts. 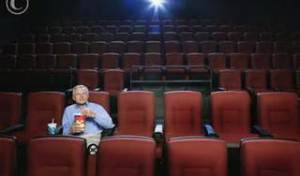 On this same broadcast, we were interviewing a lady who operates a local inspirational magazine. This issue of Christian movies came up, and I was once again being critical and cynical of them during the show. However, this lady said something so simple, yet so true. She stated that Christians need to support these movies, especially the ones that make it to the big screen. If these movies can generate the money that these film companies need, Christian movies can begin to improve due to more money and resources. Doesn’t that make sense? After all, the most important factor in these movies is the MESSAGE, is it not? The execution may not be totally on par, but can we seek the message and choose ministry over mindless entertainment? If the body of Christ would choose to support more Christian movies instead of flocking to see everything else that the world sees, it would cause Hollywood to take notice. In other words, it sounds like we need to sacrifice in the area of entertainment so that there are better options available to us to enjoy wholesome, godly movies. God can use any medium to draw people into the Kingdom through His spirit. Just imagine for a second if Christian movie makers had more capital and also allowed God to strengthen their creativity. The result could be MAGNIFICENT! Imagine the ministry that could go forth in movie theatres across this nation! The possibilities would be endless if the body would commit to supporting these movies and died to more worldly entertainment! Anything is possible!

So recently, when I saw the trailer for “I’m in Love with a Church Girl,” I shook my head and rolled my eyes. (Yeah I know… sigh) It looked boring and predictable, and I was agitated at what I considered to be a lack of originality and creativity. However, this movie may be good and I will support it as soon as it hits Redbox and DVD. I’ve somewhat been a part of the problem and not the solution, so the buck stops here with me. We have to start somewhere. If we want things to change, we have to make our voices heard and that is through our support. We must also take personal inventory of the types of movies that we allow to flood our eye gates and ear gates. As disciples of Jesus Christ, there are obviously certain types of movies that we shouldn’t be watching, but the fruit speaks for itself. The fact is that too many self-professing Christians who will pass up Christian movies to be entertained by the world system. In fact, I believe that entertainment is an excellent tool of distraction that the enemy likes to use to keep the people of God focused on the things of this world instead of Him. If we are not careful, our beliefs and values can be tainted by television and the movies that we watch. The enemy’s tactics are often subtle, and this is a perfect example. Too much entertainment is one of the reasons why Christianity in this country is so weak and watered down that it’s not even funny. Let’s stop giving Babylon our money and start INVESTING in Kingdom movies. Yes, it is an investment that could pay the dividends of more quality, ministry-drenched, creative Christian movies in the future.

Posted by SpiritualHardCandy on March 11, 2014 in Spirituality